(Michelle Bowen-Ziecheck is a writer currently living in Maryland. This is her first piece for Hood Feminism.) 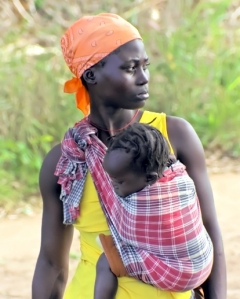 To the untrained eye, this is just another mother and child. To a Natural Childbirth Warrior? A living, breathing talking point.

There are two kinds of “Women of Color.” The first is a resident of Africa City, a destitute woman from a non-specific brown country who barely has the energy to keep flies from the corners of her mouth. The second is the woman of The Ghetto in a “developed” country; poor, uneducated, just keeping her head above water, perhaps pausing occasionally to watch the asphalt grow.

The women of Africa City are noble. Unspoiled. Close to The Earth. They have much to teach us about The Old Ways, or they are lamentably, garment-renderingly out of touch with them. If they are out of touch, this has nothing to do with colonization or white racism (maybe just a little bit, but that’s in the past). If they are Close to The Earth, this is also because they have somehow escaped colonization and racism.

If you are a progressive in the Natural Childbirth Movement (or any other, for that matter), use Africa City women to promote the idea that “natural is better.” Talk about women who toil in the fields, squat down to give birth and return to picking rice. Or peanuts. Or anything else that can be picked. After all, the women of Africa City are resilient!  Strong. So strong that they do not even require support from the other women of Africa City. Or medication. Or comfort.  This example–of giving birth in the field–illustrates how over-reliant “we” have become on useless technology. Of course, you don’t expect “us” to be quite that strong.  We are not beasts of burden, after all. But from the comfort of our leather computer chairs, we can still make time to pay our respects to the women of Africa City for their unwavering and superhuman strength.

If you oppose the Natural Childbirth Movement (or any other, for that matter), use Africa City women to remind “us” of how bad “we” used to have it, before all of our live-saving medical advances. If women die in childbirth in Africa City, it is only because they lack the Modern Technology we should be grateful that every last one of “us” has unfettered access to. Use infant mortality statistics from the most war-torn countries to argue why a healthy woman from Portland shouldn’t give birth in her bathtub with a midwife who carries oxygen and a cell phone. Redact all mentions of Africa City women who are not hopelessly impoverished. Ignore those who are systematically abused with Modern Technology, sacrificed as Guinea pigs on its altar. All bad outcomes in Africa City are due to the lack of Medical Technology, never unrelated to it, and certainly never caused by it.

No need to implicate colonization or white racism for the desperate state in which they find themselves. Be sure to use passive language.

The women of Africa City are pitiable. They wish for nothing more than to have access to all of “our” miraculous advances.  They spend every moment of their hunger-induced-hallucination-tinged waking hours praying for cold metal stirrups, off-label Cytotec and coin-flip-accurate fetal monitors mandated by legal departments. These wretched waifs need more access to things like emergency C-sections and Pitocin for post-partum hemorrhage, and they are willing to give up any semblance of autonomy and respect to get them. Because they are good girls who know their place. The women of Africa City, like other beasts of burden, are easy to control.

Now we come to the women of The Ghetto. Per the above, if you oppose the Natural Childbirth Movement, be certain to emphasize the fact that Ghetto women are not interested in this debate at all. They are too busy being fat and sassy so they don’t know nothin’ about birthin’ no babies. Their white teeth shine between fat, sassy lips as they cackle about them crazy white ladies who love them some homebirths! Ghetto women don’t care about how they are treated in “Western” hospitals. They’re just grateful they’re not in Africa City. Why they’re not in Africa City is best left undiscussed.

If Ghetto women are not sages in their own, simple-minded sort of way, then they are willfully ignorant, insolent, indolent and not worth including in any debate that requires higher brain function. That nearly everyone you encounter in the Natural Childbirth Debate seems to be white is clearly due to the fact it is not salient to the women of The Ghetto. Ain’t nobody got time for that!

Be sure to emphasize this indisputable fact no matter which side of the debate you fall on.  If you are a detractor of the movement, use it to underline how far on the fringe and out of touch the movement is. Use sexism to shame others for their racism. Make sure to point out that the nonexistence–well, as far as you’re aware, anyway–of Ghetto women on the side of the movement is indicative of how silly and trendy and insubstantial the so-called movement is.  Kind of like Brazilian waxes or platform wedges. If defenders get indignant, helpfully suggest that they’re probably premenstrual.

Pointing out that the movement is white is a particularly good strategy for a detractor, as “progressives” hate to be accused of not being “inclusive.” Never mind that you never, ever notice (or comment) on the dominating presence of whiteness in any other context. It’s fine to use it as a one-time strategy to discredit people you dislike, though you would balk if accused of something similar.  Your keen eye for racism is best suited as a rhetorical weapon against your white progressive enemies. Remain colorblind, should anyone bring up the fact that Ghetto women are far more likely to be subjected to unnecessary medical interventions during childbirth than white women. That’s playing The Race Card.  You’re the only one who should be doing that.

If you’re a supporter of the Natural Childbirth Movement, you, too, must concede that Ghetto women simply aren’t talking about childbirth. They have so many children and so many limitations, they are barely even aware that they give birth. Be sad about this. Use words like “regret” and “unfortunately” and other terminology that convey both a sense of sincere liberalism and futility. This will ensure that you don’t actually have to do anything about your own racism.  Your intentions are clearly good.

Defend yourself against accusations of exclusivity and whiteness with a two-pronged approach. First, offer proof of your complete and utter lack of racism. A Cherokee Princess great-grandmother may not be enough. A Mexican grandmother could work. Or time spent in the Peace Corps, preferably in Africa City. Second, argue that Ghetto women WOULD care about childbirth, they just don’t know they’re being oppressed. Talk about how you’re planning to educate them. Make the plan as vague as possible.  No need to follow up.

Then, as quickly as possible, recede into colorblindness. The very idea of race makes you uncomfortable. Which is why you don’t have one. If Ghetto women are not discussing these issues with white women, it cannot be because white women have dominated the conversation and alienated many of them.  White arenas are not white—they are just regular. Colorblind.

Someone may suggest that perhaps Ghetto women ARE discussing these issues—just in terms and contexts that were not created and defined by white people, thus rendering their discussion invisible. This is simply not possible.  Refer them to the tree and the forest.

(Don’t worry about the women of Africa City in all of this. They are either illiterate or too busy communing with The Earth to be a part of the discussion at all.)

Hopefully this guide has clearly demonstrated the correct use of women of color in the debate regarding Natural Childbirth Movement (or any other, for that matter). If the guidelines are too confusing, simply remember this: “women of color” are entirely theoretical. The word “women” is misleading.  They are not people– merely rhetorical strategies. Use them properly in service of your political agenda, and they’ll be sure to disappear entirely.